This content is licensed under Creative Commons Attribution/Share-Alike License 3.0 (Unported). That means you may freely redistribute or modify this content under the same license conditions and must attribute the original author by placing a hyperlink from your site to this work https://planetcalc.com/8315/. Also, please do not modify any references to the original work (if any) contained in this content.

The formula defines the cross product: 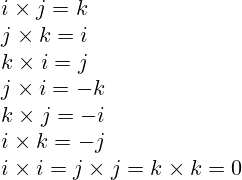