This content is licensed under Creative Commons Attribution/Share-Alike License 3.0 (Unported). That means you may freely redistribute or modify this content under the same license conditions and must attribute the original author by placing a hyperlink from your site to this work https://planetcalc.com/993/. Also, please do not modify any references to the original work (if any) contained in this content.

There was a request to make a calculator for cylindrical gears - /970/.
Plunging into the theme of gears and their calculations, I've encountered involute and evolvent terms. I thought that's interesting and they deserve a separate calculators, see them below. First is for the involute and two others are for finding the angle by the given involute. For those who are interested - the text about the involute is following the calculators.

Involute of an angle

Digits after the decimal point: 6
Involute

Finding an angle by involute(Laskin's method)

Finding an angle by involute(Cheng's method)

So, in the differential geometry of curves evolvent is a curve, normal of which is tangent to the original curve at each point (see Эвольвента в Википедии).

Because it's hard to grasp everything above I'll retell you a figurative definition as it's described at the English version of the article (see. Involute on Wikipedia).

I think the term evolvent got much clearer for you after the picture above. Now, let's see what kind of function is this. The picture I've made will help: 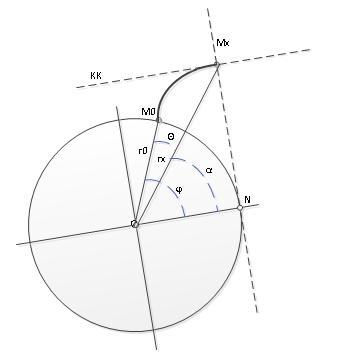 The section at this picture

(because this is our "thread"). Angle "φ" equals to the arc

that is called evolvent angle of roll and consist of a sum of "θ" angle (evolvent angle)"α" angle (angle of pressure). The arcs lenght is

is a right triangle that means

Equating these two arcs to each other, we will get

is called involute or the evolvent of the function.

The equations of involute curve in polar coordinates look like this

By the construction we can see that "α" angle can vary from 0 to 90 but excluding 90 because in that case straight line KK will be parallel to MxN.

Why should we do all this? The evolvent of the circle is used in involute gearing - the gearing in which the profiles of the teeth are outlined the involute of the circle. During the involute gearing, total normal to the teeth in the contact profiles is always coincided with the common tangent to the base circle. This tangent is called the pressure line because the contact point of the teeth moves by that line during the wheel movement.
(картинка). This is the most common type of gearing.

And involute is used in calculations associated with involute gearing. Moreover, there are involute calculations and vice versa - finding an angle by its involute.And the second type of calculation is not that simple because the equation

is a transcendental equation, and it can only be solved by numerical methods.

Based on Newton's method, which consists of an iterative calculation procedure

The Know-How of this thing is in the choice of the initial values, which by the method of Laskin is calculated as

, where I - initial value of the involute

There are five iterations used in the calculator, but four should provide the accuracy to six decimal places. This method works for the values of involute from 0 to 1 i.e. you can find the angles from 0 to 64.87 degrees. In practice, that is enough. There are tables for finding the involute that are similar to the tables of trigonometric functions and they have a range of angle from 0 to 60.

Cheng's method
Based on the determination of an approximate value using the asymptotic curves. Cheng brought the following formula:

This method can be used for finding the involute values that are strictly less than 1.8 i.e. it can find the angles up to 71.87. And you don't actually need those above - approaching the 90 the tangent tends to infinity, with all the ensuing consequences. Also, there are no tooth gearings with such large angles.

PLANETCALC, Involute of an angle